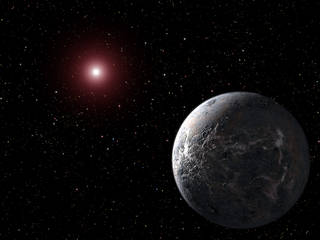 The future study of Earth-like planets around other stars will require advances in several key space technologies. Broadly speaking, these challenges lie in the areas of high-angular-resolution sensing and high-contrast imaging, and in improvements to the stability of space telescopes. Such space observatories might take many forms; mission concepts studied so far include designs based on coronagraphs, starshades and various hybrid designs. These approaches use wavefront sensing and control, advanced optics and state-of-the-art structures, materials and mechanisms, and require specialized spacecraft subsystems. Starshades require the coordinated use of multiple spacecraft and will rely on new guidance, navigation, and control algorithms. In all of these cases, fully testing these observatories on the ground, prior to launch, will be challenging, and careful attention to methods of verification and validation will be critical to mission success. (Image credit: NASA/JPL/Caltech) The Exoplanet Exploration Program’s roadmap of NASA exoplanet missions. The currently operating missions Hubble, Spitzer, and Kepler/K2 have revolutionized our understanding of exoplanet abundance and diversity through discovering and characterizing transiting systems. TESS launched successfully in 2018 and as science results begin to come in, will bring another step forward in expanding our understanding of exoplanet abundance, especially in nearby systems. JWST (planned for a 2021 launch) will include the capability to perform mid-infrared transit spectroscopy of exoplanets and to directly image young massive exoplanets. WFIRST is planned for launch in the mid 2020s with a high-contrast coronagraph instrument (CGI). CGI’s adaptive optics and low-order wavefront sensor will allow the direct imaging of many known exoplanets and perform an essential technology demonstration for future missions. A starshade could be launched to rendezvous with WFIRST, which would enable direct imaging of Earth-like exoplanets (pending recommendations of the 2020 Decadal Survey). If recommended, large missions like LUVOIR (Large UV/Optical/IR) Surveyor and HabEx (Habitable Exoplanet Imaging Mission) will be capable of directly imaging and spectrally characterizing Earth-like exoplanets, surveying nearby stars to determine the abundance of these planets, and to search for the spectral signature of gases like water vapor and oxygen, possibly pointing to the presence of life. The Origins Space Telescope (OST) plans to develop the capability to measure the atmosphere of rocky exoplanets transiting M dwarfs and the direct imaging of cool gas giants. Any of these missions, if approved, would be capable of discovering compelling evidence for signs of life on distant worlds. However, abiotic sources of biosignature gases will require a wider-band spectral characterization, possibly performed by a later mission using interferometry to obtain higher angular resolution at mid-infrared wavelengths. All of the possible missions beyond WFIRST require new technology and are the target of ExEP’s technology focus.

Earth-like exoplanets are between 10 million and 10 billion times fainter than the stars they orbit, depending on whether they are observed at mid-infrared or visible wavelengths. The presence of water, methane, and oxygen on a planet, revealed by reflected starlight, is therefore masked by the star’s overwhelming glare. Thus, the most important technological challenge is the demonstration that a space observatory can reject scattered starlight to separate the light of the planet from its parent star. Approaches to suppressing starlight include an internal coronagraph and external occulters. Technologists around the country already have successfully demonstrated these basic approaches, to the required contrast levels, in JPL’s High-Contrast Imaging Testbed. Efforts to broaden the suppression wavelength bands continues. Interferometry techniques in the infrared also have demonstrated broadband starlight suppression at levels approaching science requirements.

The removal of diffraction is only part of the coronagraph’s design goals. It must also remove the scattered light observed in the focal plane, appearing as speckles due to imperfections in the optics. This is done through the control of deformable mirrors. As a final step, post-processing of the data images further improves the effective contrast.

The most important recent development in coronagraph technology was the decision to baseline a coronagraph instrument on a potential WFIRST space mission. This coronagraph would be the first high-contrast coronagraph with wavefront control to fly in space. While both the Hubble Space Telescope (HST) and the James Webb Space Telescope (JWST) have on-board coronagraphs, neither has the corresponding wavefront sensing and control required to match WFIRST’s coronagraph 10-8 contrast sensitivity and close inner working angles (< 3 λ/D). WFIRST will also have the first ultra-low noise visible detector and deformable mirrors to reach low-Earth orbit and beyond. When successful, the WFIRST coronagraph will be the state of art.

External occulters, or starshades, block starlight by shadowing the entrance pupil of a telescope using a physical separation between the starshade and the telescope, sufficient to provide the needed inner working angle. This typically requires the starshade to be tens of meters in diameter and located tens of thousands of kilometers from the telescope.

A starshade is ultimately an optical device. It must do at least three things: block the on-axis starlight and redirect the diffraction pattern from both starlight and sunlight with the apodized petals, and mitigate sunlight reflected off the petals into the telescope.

If a circular occulter were used rather than one with numerous petals, a Poisson spot—or bright point—would result in the telescope’s focal plane, ruining the ability to image faint exoplanets. Independent optical modeling predictions have shown excellent agreement concerning the contrast sensitivity to petal shape errors, and detailed preliminary error budgets have been proposed.

The light paths within a coronagraph or interferometer must be controlled to subnanometer precision to enable the required starlight rejection. This level of control corrects for static imperfections in the optics, and slows dynamic changes in the observatory. The control typically is achieved using a hierarchy of nested servo systems, and at the lowest level relies on the use of deformable mirrors to remove the finest residual wavefront errors. Advances in both control algorithms and deformable mirror technology are central to interferometric and coronagraphic approaches. In particular, longer stroke, large format, flight-qualified deformable mirrors are needed.

The coronagraph’s low-order wavefront sensor and control (LOWFS/C) is the critical component for contrast stability during science measurements. It uses the bright starlight rejected by the coronagraph optics as a high signal source to sense and maintain the state of the optical wavefront established by the high contrast imaging electric field control (EFC). The starlight wavefront is sensed at high temporal frequency to suppress fast, vibration-induced, line-of-sight errors and pointing drift as well as to correct low-order wavefront aberrations due to telescope thermal drifts caused by slow orientation changes during long observations.

WFIRST is conducting a laboratory demonstration of a LOWFS/C architecture using a Zernike wavefront sensor (ZWFS) that provides information for tip/tilt control. It relies on a fast steering mirror for tip/tilt control and the coronagraph DMs for low-order wavefront correction. The LOWFS/C’s sensor is designed to have line-of-sight sensitivity of 0.4 mas and low order wavefront, focus (Z4) to spherical (Z11), sensitivity on the order of 10s of pm. Performance against focus, tip, and tilt errors was demonstrated in 2015 by the WFIRST coronagraph team (Milestone #6), where a 14 mas vibration input was attenuated to a residual error below 0.5 mas rms per axis. The last major coronagraph milestone, scheduled for mid-2016, will be integrating the ZWFS to the WFIRST coronagraphs and achieving contrast levels below 10-8 at IWA’s ≤ 3 λ/D while receiving simulated flight environment disturbance inputs.

Spacecraft thermal control and pointing control are essential for effective planet imaging over hours or days. The thermal architecture could include passive sunshields to efficiently reject heat, as well as nested active thermal control systems to maintain the observatory in a submillikelvin stable cocoon. The pointing jitter will be controlled to within milliarcseconds, pushing the state of the art. Multistage jitter control systems are being developed that include combinations of active and passive vibration isolation.

The collected photon rate from exo-earths is expected to be about one per tens of minutes. Consequently, the imaging detectors for both the detection and spectrometer channels of a coronagraph instrument must be highly sensitive, have ultra-low noise, and must be radiation hardened. In addition, the need for low spectral crosstalk spectroscopy and large outer working angles to carry out disk science, and to image the nearest exoplanets, requires a large format focal plane array—2k×2k pixels or larger. The dark current must be no greater than 10-4 e-/px/sec at the beginning of life with minimal degradation in the space radiation environment over the mission lifetime.

The leading candidate detector technology in the visible is the silicon electron multiplying charge coupled device (EMCCD) detector which can provide dark current noise of order 5×10-4 e-/px/sec while operating at 165 K after lifetime irradiation and clock induced charge (CIC) of order 3×10-3 e-/pix/frame.

The WFIRST/CGI has baselined the e2v CCD201-20 detector (1024×1024; 13 um × 13 um pixel pitch) for both of the coronagraph science cameras and is carrying out full characterization and displacement damage dose (DDD) radiation testing.

Near infrared detectors with high sensitivity in the spectral region of 900 nm to 2.5 um (and maybe greater) are critical for the spectral characterization of exoplanets and identification of possible biosignatures. Future exo-earth missions (HabEx, LUVOIR) will consider infrared spectroscopy capabilities to detect hydrocarbons such as methane (1.00 um, 1.69 um, and 2.32 um). The presence of methane in an oxygen-rich atmosphere like Earth’s is one of the few known spectral combinations that point to a biotic origin with small probability of false positives.

The ability to probe terrestrial regions around stars (e.g. the habitable zone) requires a minimum aperture size. The more distant the star, the larger the telescope aperture needed to probe these regions.

The habitable zone of an exo-earth at 10 pc has an angular resolution of 100 mas at planet quadrature. To just detect such a planet at 400 nm, a telescope should have an angular resolution of 25 mas if we conservatively assume a 3 λ/D coronagraph. This telescope would then have a primary mirror aperture that is 3.3m. However, our end objective is spectral biosignatures. Imposing the same parameters for detecting the planet at 760 nm (oxygen line) would then require a 6.3m telescope; water at 940 nm would require a telescope aperture approaching 8m. Improvements in inner working angle can help drive the aperture size down.

Large primary mirrors enable more than just improved angular resolution. They enhance planet sensitivity due to sharper PSFs, reduce science integration time due to greater collecting areas and throughput, and enable probing of a larger number of more distant stars’ habitable zones. The telescope’s primary mirror size and architecture (monolithic or segmented, obscured or unobscured) is among the most important decisions a space telescope design team will have to make, especially when considering optimizing the performance of a coronagraph.

The biggest unknown to date needed to select the telescope size is the fraction of sun-like stars with Earth-size planets in their habitable zones, also known as ηEarth. As ηEarth increases, fewer planetary systems will need to be observed in order to build sufficient statistics about the habitability of exoplanets. If ηEarth is near 0.1, then a 10m-class telescope is required to detect and characterize approximately 30 candidate habitable zones for exo-earths. If ηEarth is above 0.8 then only a 4m-class telescope would be required to observe the same number of candidate habitable zones. ηEarth is expected to be better constrained in 2016, based on additional analysis of the Kepler data.